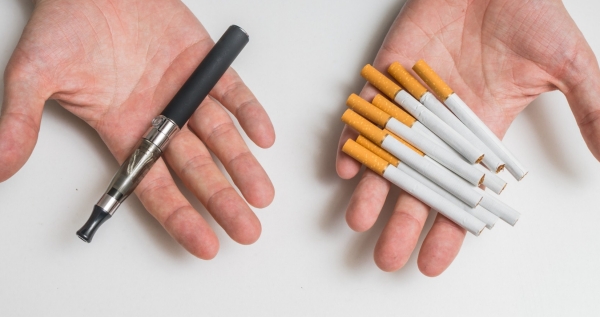 The debate of whether vaping is better compared to smoking cigarettes has been made a hugely popular conversation. Doctors, researchers, and laymen have all delved into this discussion. Biases and lack of extended research have made finding a conclusion for this debate rather difficult. However, we are aware of a lot of research that could help conclude a few things– giving way to a potentially larger-scaled conclusion.

For starters, inhaling any type of heated matter– vapor or smoke, has not been found to be beneficial for your lung or respiratory health. So when people say phrases like “vaping is better…”, they mean compared to cigarette smoking, not compared to refraining from vaping (also called e-cigarettes) anything. There is common misconception when comparing vaping and smoking. Many people strive to convince people that vaping is not bad for you at all– which is false. People like to compare vaping to cigarette smoking because it makes vaping look way healthier, or potentially not bad at all when compared to cancer causing cigarette smoke. This perception is often taken on by companies that sell or are affiliated with vaping products– be it e-juice (the liquid heated up to become vapor), vaporizer pieces, parts, etc. Advertisements from these companies tend to look something along the lines of this: 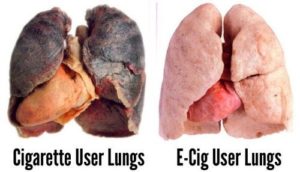 While neither vaping or cigarettes are good for your health, one does seem to be the obvious lesser of two evils. Cigarettes contain over 200+ carcinogens– cancer causing agents. Primary chemicals from cigarette smoke include nicotine, formaldehyde, hydrogen cyanide, lead, and carbon monoxide. These chemicals are not “in” cigarettes, but are created with heat combustion and are then present in the smoke, which it what enters a smokers lungs. Vape juice on the other hand, contains roughly 4 chemicals including vegetable glycerin, propylene glycerol, sometimes nicotine, and small trace particles of carcinogenic chemicals.

In the states, cigarettes can cost anywhere between $5-$12 depending on the state they are bought from. These prices exclude cigarette taxes between -12% (making a $7 pack now $6) and 84% (making a $7 now almost $13). An article from thebalance.com says consumers who smoke a pack a day will spend $22,290 on cigarettes in just ten years. The average starter vape on today’s market sells for around $35. The average cost of vape juice varies due to the different levels of nicotine available. E-juice manufacturers generally offer 0, 3, 6, 12, 18, 36, and 42 milligrams of nicotine in their vape juices. Because of the difference in percentage of nicotine, prices range from about $10.00-$30.00. Sizes of e-juice typically range from about 10ml to 300ml, which can make prices range even more substantially. However, the long term price difference between vaping and smoking is so drastic that it just might be the one thing to make smokers think twice about their habit.

The smell of cotton candy or strawberry vapor is far more appealing than the stereotypical strong scent of cigarette smoke, resulting in lots of e-cigarette users vaping indoors and around others. Contrary to common misconception, the vapor given off from e-cigarettes is unhealthy for surrounding individuals to inhale. High concentrations of nicotine have been found in e-cigarette vapor, especially in settings like cars when the windows are rolled up with no ventilation. Vaping has also been found to damage indoor air quality. Yes, secondhand vape is less harmful than secondhand smoke, but it is not at all beneficial to those inhaling the secondhand vape.

How to quit smoking and start vaping:

How to quit vaping