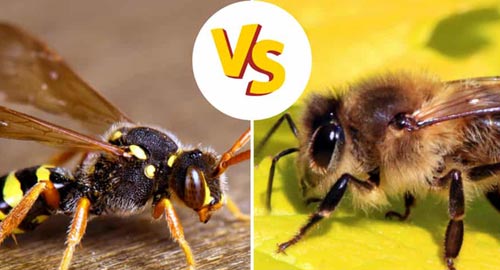 Spring is here, and so will be the increase in our flying friends and foes. With the bee population on the decline due to CCD (Colony Collapse Disorder) it is important to know the difference between wasps and bees before deciding the best course of action for hives near you. While wasps and bees both look similar with their striped, often yellow and black, color scheme, their physical characteristics and behavioral patterns are very different. Knowing these differences can help avoid killing off the pollenating bees which are so vital to the future of fruit, vegetable, and plant propagation.

Wasps have smooth bodies and long legs – in fact, their legs are round (tubular) and waxy in appearance. Their abdomen and thorax is cylindrical.

Wasps are predators, and their diet mostly consists of invertebrate insects such as spiders, caterpillars, ants, bees, and flies. Sometimes wasps sip on nectar, and they are often attracted to human beverages that are high in sugar content like soda and beer.

With no wax producing glands, wasps have to get creative with their nests. Sometimes wasps create a paper-like building substance by mixing wood fibers with saliva. The resulting pulp is what they use to make combs with cells for their larvae. They place these nests on trees, holes in the ground, and other sheltered areas with outdoor access like attics and sheds.

Some social wasps are started by the queen and once the initial structure is completed, the remaining construction is finished by sterile female workers. The size of a nest is indicative of how many female workers there are in a colony. Some very large nests can have several thousand female workers.

Wasps are inherently more aggressive than bees, normal behavior since they are predators. The stinger of a wasp is smooth and easily comes out of the skin, allowing them to sting multiple times. Wasps release pheromones when they sense danger. When this message is received by other wasps, they join in on attacking the perceived aggressor.

Bees have hairy bodies and legs. Their legs are flat and wide, and their abdomen and thorax is round.

Bees are the quintessential pollinator. They collect pollen and sip on nectar, which makes their natural places of congregation areas where there are a lot of flowers. Bees also use water, both for drinking and cleaning of their hives. The Queen bee eats a nutritional secretion from the glands found in the hypopharynx of nurse bees known as “Royal Jelly”. This jelly is also fed to all of the larvae in the colony.

Bees, ever social, always live in colonies. The hierarchy of bees consists of a single queen, many workers and drones. A Beehive’s internal structure is comprised of hexagonal cells made of beeswax, called a honeycomb. These cells are used to store food, honey and pollen, and also to house the eggs, larvae, and pupae of the colony. The structure will have honey stored in the upper comb, beneath it are the honey and pollen storage cells, bee cells by caste, and the lower edge of the comb usually contains peanut-shaped cells reserved for the queen.

The nesting sites for bees can be rock cavities, hollowed trees, and caves. Bees occupy their nests for several years. The outside of the hive entrance is usually smoothed, if bark, and the cavity walls are coated and sealed with a thin layer of plant resin to help preserve the integrity of the hive.

Bees have poison in their stingers and generally will sting anyone who attempts to disturb their hives. The honeybee stinger is barbed and will stay in the skin after a person is stung and is ripped, rather than released, from the thorax of the bee. This means most bees can only sting once, as the ripped thorax results in the death of the bee shortly thereafter.

Most of us are not interested in studying the behavior or finding the nest of bees or wasps, so visual identification is the fastest and easiest way to differentiate and make a plan of action, whether that is enrolling the help of a pest control company or deciding to plant more flowers to help contribute to the health of the bee population.