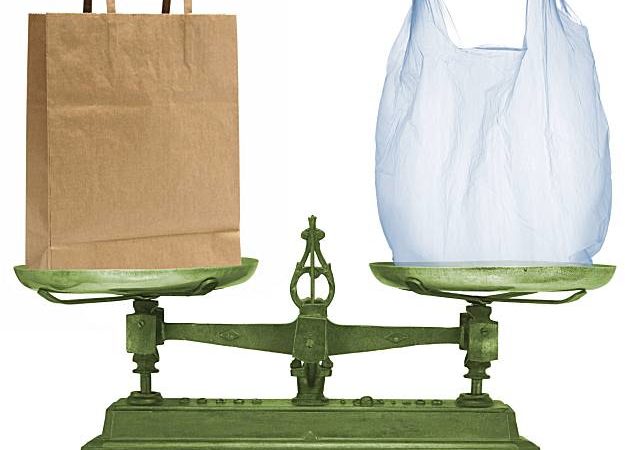 Paper or plastic?—Which ever you choose to have your groceries bagged, there are hundreds of concealed facts behind your bag of choice. Again and again, society thinks they know which choice is better (not to say they act on their knowledge)—but are they right?

Does your home have that one bag full of more bags either in the pantry of under the sink? They’re there for obvious reasons—to be reused. Plastic bags can be used for a vast amount of things, besides transporting food from the store to the car, and then the car to the kitchen. From keeping one in the car for trash, stuffing shoes with them to keep their shape, impromptu lunch pails, transporting pairs of shoes, doggy waste bags, to taking an extra one to the beach to put your suit in afterward, there are TONS of uses just from these simple little bags.

Paper bags seem to have a little less usability than plastic, which is pretty self-explanatory—they’re made of paper. Besides grocery bags, they can be used for DIY gift bags, gift tags, recycle bins, and much more if you remember to be gentle with their paper material.

The amount of debates about paper and plastic bags are immeasurable. An article from Stanford Magazine reads, “Two of the most important considerations for the eco footprint of a bag… are whether we reuse it and, if so, how many times. An exhaustive Environment Agency (U.K.) report from 2011 found that paper bags must be reused at least three times to negate their higher climate-warming potential…” Single plastic bags are the most eco-friendly in their production, yet have some of the most detrimental environmental effects due to societies lack of knowledge on something called, recycling. When San Jose, CA, had their first plastic bag ban, the results were astounding. Their ban proved an 89 percent reduction of plastic bags winding up in their city’s drains. While it’d be easy to just ban plastic bags everywhere, a more sustainable alternative needs to be put in place, which has been tried by paper bags, but unfortunately not been wildly successful (since most folk don’t use them more than three times to eliminate their carbon footprint). When comparing the two, paper bags seem to be the lesser of two evils, if we have to pick a winner. Just to reiterate our dumbfounded knowledge of recycling, at the rate plastic bags are being littered, there will be more plastic than fish in the ocean by the year 2050. Additionally, the recycling rate for plastic bags is 1-3% while paper is 10-15%– yikes.

Since neither paper nor plastic seem to be doing the environment any good, respond to “paper or plastic?” with, “neither.” Reusable shopping bags are the ultimate way to go, although be sure to stay away from non-organic cotton based bags since cotton absorbs toxins and may seep into your groceries. Heartier plastic bags, made from heavier plastics are often made of polypropylene which can leak chemicals into your food—so avoid putting unpackaged foods in these bags.

Ultimately, “Paper or Plastic?” — the choice is yours, choose wisely.