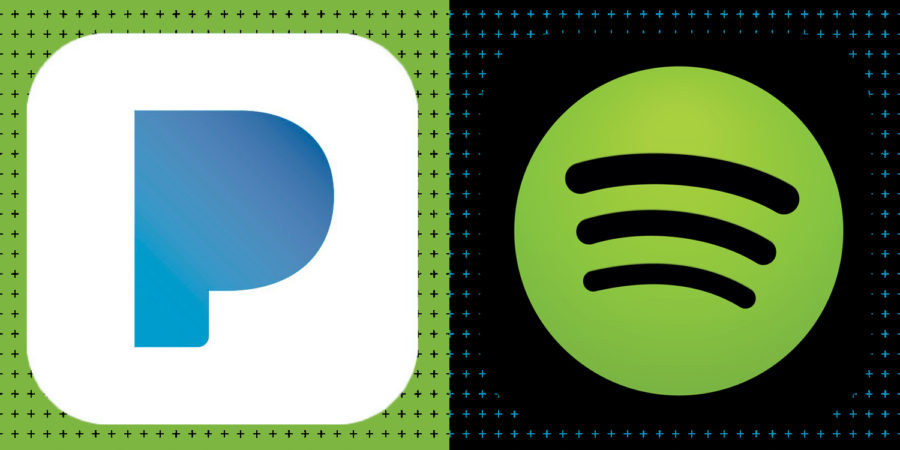 Pandora and Spotify’s services’ are fairly similar in cost. Monthly, Pandora charges $9.99 and Spotify charges the same. The price difference between these services is shown in their annual pricing. Pandora Premium’s annual cost is $109.89, compared to Spotify’s $99. When it comes to their free trials, Pandora’s is 60 days and Spotify’s is 39 days. So if you want a little more time before you buy, Pandora may be for you.

Perhaps the largest difference in Pandora and Spotify’s music services are their music libraries. Spotify has been the music streaming ring leader for years, having access to 30 million songs. Pandora has recently upped their game, having now just as many songs available as Spotify. While Pandora is somewhat late to the streaming game, they have quickly made up lost time. Though, both services have had some tough luck getting select artists to allow them to stream their songs. Popular artists like Taylor Swift, Garth Brooks, and Jason Aldean don’t allow their music to be streamed, especially without a paid subscription, which may make subscribing to these services undesirable for die hard Swifties, but hasn’t seemed to bother the millions of subscribers who already have subscriptions. One of the main library differences between the two streaming services, is that Spotify has a more “unique” library—containing remixes, collaborations, etc., while Pandora stays having more mainstream music. The downside to both is that if you’re wanting to get super specific in your search—something like “Tegen and Sara’s live performance at Bonnaroo Music Festival”, you will find no such thing (as you’d expect). For your specific searches, stick to YouTube.

Spotify blows Pandora out of the water when it comes to where in the world you can access it. If you live anywhere besides the United States, New Zealand, and Australia—sorry, but you’re out of luck with Pandora. If you want to cheat the system however, using a VPN you can change the location of your computer, allowing access to Pandora if in a country that does not have access to it. Spotify on the other hand, has access in 20 different countries across the world—simply crushing Pandora’s ability here. Where you live may definitely make or break which streaming service is right for you.

Before subscribing to a streaming service, testing out the free version is always a must. Make sure you are aware that if you don’t like the free version, you actually might like the subscription version. For example—when looking up Cardi B’s new album on Spotify free, you cannot click on a song to play it, you just have to shuffle her album, where on Spotify Premium, you can play any song in the library, add it to a playlist, and download it to listen to it offline with no Wi-Fi connection. And for Pandora—rather than choosing stations to listen to with no specific song search and limited skips, their Premium subscription service is a whole different world, having song search ability, search by album, a playlist of all your free Pandora “thumbs-upped” songs, and ability to download songs and albums to listen to offline. So don’t let these free versions fool you with their lack of similarity to their Premium services.