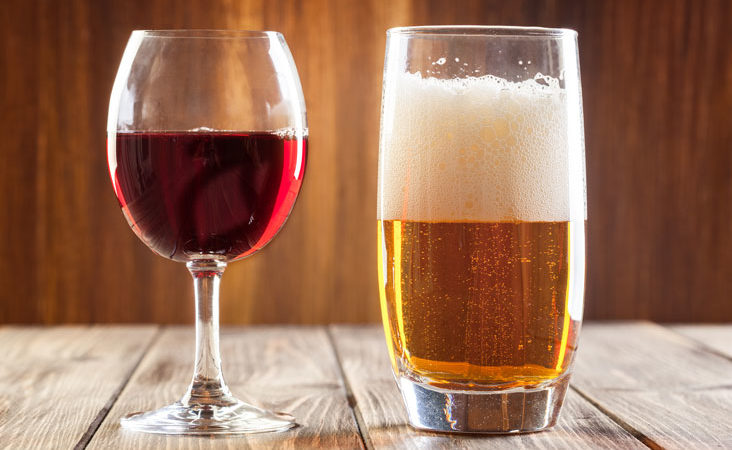 Both wine and beer are alcoholic beverages that Americans consume on a fairly large scale. In fact, according to JAMA Psychiatry Americans are consuming more alcohol than ever. So, the question is, how are we discerning in our tastes and how do people choose between wine or beer? While some people strictly stick to one side of the pool, wine and beer have distinct differences and offer a different experience. Beer and wine have pros and cons, let’s explore further.

An average 5-ounce glass of red wine is just 125 calories. And red wine has a multitude of health benefits if taken in moderation. One glass of red wine contains 187 mg of potassium, which is about 4 percent of your daily value and, according to a study, wine contains a significant amount of fiber, too. One study found that small doses of resveratrol, found in red wine, can blunt the effects of aging. Flavonoids found in wine may protect your skin from harmful UV rays, according to a Spanish study. White wine is acidic, which can demineralize your teeth’s enamel. The cons of wine include the following.  A study in Lancet suggests that red wine can trigger migraines. Another study found that resveratrol isn’t good for your health after all. Dehydration that often comes with any alcohol consumption. Wine can elevate your triglyceride levels, and high levels are associated with health problems such as heart disease, obesity, diabetes, and kidney disease. Excessive amounts can lead to hangovers, dependency, and liver damage. Fewer calories and antioxidants don’t necessarily make for a healthier drink.

Most of the potential benefits are only found in red wine.  Many believe wine is high in sugar because it is made from grapes. However, that’s not the case because the fermentation process in wine-making converts sugars into alcohol. Only sweet or dessert wines are high in sugar. A trick to making the beverage a bit more calorie friendly is making a glass wine spritzer, half wine, half club soda. You get the taste you want, but it cuts the calories in half. So next time you get together for a girl’s wine night, keep that helpful trick in mind.

Next up, beer! Cracking open a cold one on a hot summer day is satisfying. The pros of Beers are might surprise those who always hear wine is superior. Germany’s Commission E — the German equivalent of our FDA — has approved hops to treat restlessness, anxiety, and sleep disturbances. The nutritional value of beer exceeds that of wine. The values of protein, fiber, B vitamins, folate, and niacin found in beer make it more like food. One study in the American Journal of Clinical Nutrition found that especially hoppy beer can increase bone mineral density, i.e., make your bones stronger.

The cons of beer are not surprising. Any binge drinking college student that the freshman 15 could be on account of the excessive amount of beer they drank.  More upscale craft brews can sometimes pack over 300 calories per bottle, Excessive amounts can lead to hangovers, dependency, and liver damage, Heartburn, beer googles and dehydration. While the calories can add up (think about the beer belly), beer offers significant nutritional value, as mentioned above. Some promising studies suggest the world’s most widely consumed alcoholic beverage, consumed in moderation, is good for your health.

Enjoying an ice-cold brew can be great any time of the year. While the average 12-ounce serving of beer contains 150 calories and 13g carbs, higher than wine and spirits, opting for beer does doom you to an unwanted beer belly.  Choosing light versions of your favorite beer will save you upwards of 50 calories per serving and cut the carbs in half.  Lager and wheat beers are lower in both calories and carbs per serving compared to heavier beers such as ales, stouts, and porters.  Beers differ in color, flavor, and consistency, and the good news all offer some nutritional value.  The brewer’s yeast used to ferment beer contains B vitamins that benefit the nervous system health and reduce homocysteine, a chemical that can contribute to cardiovascular disease. If you are an occasional beer drinker, you may want to order a dark beer, which has more antioxidants and iron compared to lighter varieties.

All things are good in moderation. Whether you enjoy the taste of one over the other or enjoy both, now you are more informed about the pros and cons of each beverage.