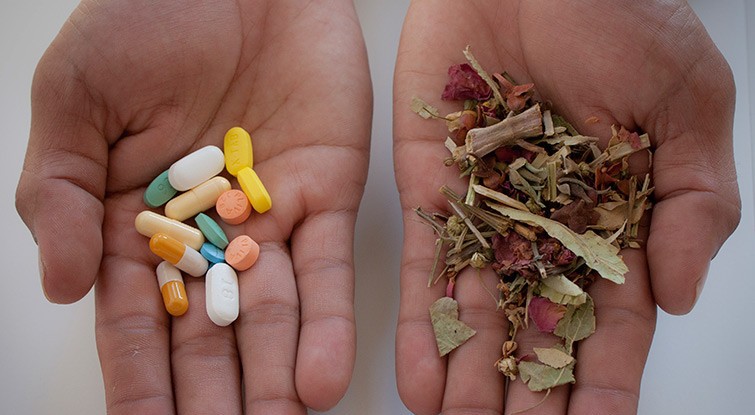 Today more than ever, health, medical, and lifestyle choices and opinions are flying around everywhere—regardless of whether you want to hear about them or not. Talk of alternative medicines is on the rise, alongside the skepticism about them too.

Naturopathy, or naturopathic medicine, is defined by the American Association of Naturopathic Physicians as, “… a distinct primary health care profession, emphasizing prevention, treatment, and optimal health through the use of therapeutic methods and substances that encourage individuals’ inherent self-healing process. The practice of naturopathic medicine includes modern and traditional, scientific, and empirical methods.”

Conventional medicine, or what we also call Western Medicine, is defined by The National Institutes of Health as, “A system in which medical doctors and other healthcare professionals (such as nurses, pharmacists, and therapists) treat symptoms and diseases using drugs … or surgery.”

Conventional medicine is what we read about in high school history class about nurses aiding soldiers during war and the many medical “firsts”. Naturopathy is not talked about in your typical American high school history class—or even medical related class. This is due to the upbringing of naturopathic medicine originating from places outside the country, including: Germany, Europe, India, and South East Asia. In fact, naturopathic medicine didn’t make its way over to the United States until just before the 1900s.

If you are like the majority of the United States’ population, you grew up utilizing conventional medicine measures— going to see a Medical Doctor (MD) for annual check-ups, sports physicals in middle school, swab tests when your throat was itchy, and everything in-between. Conventional medicine is what we as a country know and are used to. This type of medicine works in the way it is meant to be used. When an individual feels off, they go in for a check-up to seek treatment for the symptoms of their ailments. Patients receive medical advice and more often than not, a pharmaceutical prescription to treat said condition. Thus, conventional medicine can be looked upon as a treatment based medicine. This is where naturopathic and conventional medicine go their separate ways.

Naturopathy is a well-known preventative based medicinal practice— though patients can seek treatment through this as well. Rather than going in to see a MD when symptoms spike, regularly seeing a Naturopathic Doctor (ND) can give patients the ability to avoid symptoms from spiking. NDs are often looked down upon as being somewhat witchy and pseudoscience-esque, when in reality they attend accredited 4-year naturopathic medical school and have to pass comprehensive board exams before receiving their medical license. NDs have skillsets that differ from MDs, which brings in skepticism—which is normal to occur when something begins to integrate itself into a medical world that has been primarily conventional for 10,000 years. Plus, skepticism is a good and healthy habit to have, to ensure validity of claims, in this case, medical claims—just be hyper-aware of confirmation bias.

The skills and knowledge possessed by both MDs and NDs give them unique advantages when it comes to dealing with certain conditions. Let’s take cancer for example. MDs have the skillset to find the cancer within one’s body and maintain the ability to help treat it by radiation, surgery, and other therapies. While a ND wouldn’t have the ability to find cancer within a patient, they may be able to notice symptoms that would have them recommend the patient sees an MD. A ND may advise patients to take preventative measures if they were genetically predisposed to certain types of cancer. This may include lifestyle changes, certain diets, and other measures. If a patient comes to see a ND after a cancer diagnosis, the ND may offer supplements, exercises, and other remedies to help ease the patient’s upcoming treatment.

It is not a Naturopath’s drive to take over the medical scene of primarily what is still conventional medicine, but to add beneficial natural preventative and treatment methods to those who wish to utilize them.

Recently, trends show the combination of both conventional and naturopathic medical services may be one of the most advantageous health choices that one can make.