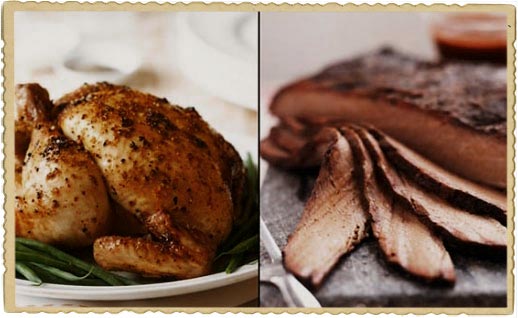 Americans consumes between 8 to 10 ounces of meat per day. That is actually twice the world average. There are thousands of blogs and dietitians that have hotly debated the importance of whether chicken or beef is better for your health. Most say that chicken is better for overall health but there are a few people that state that beef can be just as beneficial. Bodybuilders prefer the protein intake from beef when trying to bulk up. The debate going back and forth has raged for the last few decades and numerous studies have proven different points about both chicken and beef.  There are a few misconceptions out there about whether one is healthier than the other, but it is important to break each meat down in order to understand if one is better than the other.

Is chicken really lower in fat than beef?

One of the main points that people make about chicken is that it is lower in fat that beef. That leads most people to the assumption that chicken is the healthier alternative and yes there are some cuts of meat that have a way higher fat content that most chicken. Heart disease is a big problem and doctors are warning their patients to make sure that they focus on lower the amount of meat that they eat and the amount of fat in that meat. But one thing that people often forget about is that beef comes in some very lean cuts. Some of these cuts are just as lean as chicken.  Chicken is naturally low in fat but beef cuts like rump steak, sirloin steak, and eye fillet. These are the leanest cuts with about 4-5% fat content and about 1 to 2 grams of saturated fat.

Which meat has the more calories?

Does chicken have more protein or does meat?

For a long time, chicken was the preferred choice of protein in the health and fitness community but the popularity of the Paleo diet has caused a rise in the beef consumption. The Paleo diet is not focused on caloric intake but instead on eating the right foods. It is a popular diet with the Crossfit community, where the goal is to gain muscle. The Paleo diet requires more beef intake than chicken which has caused a rise in the amount of beef that people are eating. But which has the most amount of protein? Beef has 36 grams of protein for every 100mg of lean beef. Chicken has 18 grams of protein per breast. Beef has more protein than meat hence is more poplar for those wishing to put on muscle.

Is chicken really the best way to help lower cholesterol?

Heart disease has become more of a topic of conversation among doctors and their patients. There is a link between high cholesterol and heart disease so doctors and dietitians often request that their patients focus on eating foods that are lower in cholesterol. Beef is often cited as the meat with the highest cholesterol due to its saturated fat content.  But new studies have shown that there are different kinds of cholesterol both good and bad and they affect the body differently. Currently, both beef and chicken have the impact on cholesterol. Chicken has the same amount of cholesterol as a lean cut of beef but chicken has less saturated fat but the overall amount is negligible. Chicken now has been genetically engineered to be bigger and fatter and the saturate fat content has changed. When looking for a meat with lower cholesterol focus on grass-fed beef or chicken raised without hormones or antibiotics.

Which one contains more vitamins?

There are a lot of vitamins in beef. In fact, there are more vitamins in beef then there are in chicken. Beef is one of the best sources of iron available in a food source. There is 1.6 milligrams of iron per every 3 ounces of a typical steak with the fat trimmed off. That 1.6 milligrams is 9 percent of the daily value that is recommended for human consumption.  Chicken only has 0.9 milligrams in one chicken breast. Zinc is another vitamin that is found in abundance in beef. A serving of steak has 6 percent of the daily value and once again a chicken breast only has 0.9 milligrams. Potassium is another vital mineral that is more prevalent in beef than chicken. Beef has 313 milligrams of potassium whereas chicken only has 220 milligrams. Vitamin B-12 is also in both chicken and beef but once again beef comes out on top. Each serving of beef has 25% of the daily recommended value while a serving of chicken on has way less than that.  However, chicken is a better source for the vitamins B3, B5 and B6.

When breaking down the difference between chicken and beef, the only real difference is the saturated fat and calories in beef.  Both are full of essential vitamins and both have a lot of protein. Chicken is a better choice when trying to lose weight and cut out some calories and beef is better for gaining weight or muscle. Both are good for you, but only if you are comparing a lean cut of beef to a chicken breast.