The cold and wet holiday season has finally arrived. This means we can finally sit inside all weekend and binge watch our favorite shows– guilt free. 90’s young adult dramas are the epitome of staying in all weekend wrapped in your blanket with a mug full of your hot drink of choice. Which show people choose to watch is the biggest task at hand– especially if you are not binging alone. Friends, Dawson’s Creek, Seinfeld, Freaks and Geeks, and Boy Meets World are all ideal shows to get your fix of 90s sitcom dramas. Perhaps the two most binged dramas are Beverly Hills 90210 and Saved By the Bell. Both of these television shows are iconic to those who watched, and are still talked about to this day. Which of these two shows will satisfy your craving?– read on. 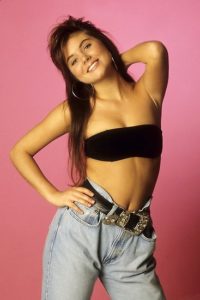 Like any production, the cast will either make or break the success and popularity of the show. Beverly Hills 90210 (not to be confused with the 90210 reboot in 2008) had a cast that fit the characters in the show perfectly. The actors and actresses in this show are still primarily known for their roles in this show, even almost 30 years later. The Beverly Hills 90210 cast included: Shannen Doherty, Jason Priestley, Hilary Swank, Luke Perry, Jennie Garth, Tori Spelling, and most famously, Tiffani Thiessen. Saved by the Bell’s cast members are a bit more classic to the 90s television world. Mario Lopez, Dustin Diamond, Mark-Paul Gosselaar, Lark Voorhies, and once again, Tiffani Thiessen. A lot of the debate as to which of these shows is better usually stems from the fact that Tiffani Thiessen stars in both of them. In Beverly Hills 90210, Tiffani plays the character Valerie Malone, and more famously, Kelly Kapowski (shown in the image to the left) on Saved By the Bell. Her characterization of Kelly Kapowski in Saved By the Bell as the popular head cheerleader makes her juicy drama filled life appealing to those looking for a little theatrical binge watching. Thiessen’s role in Beverly Hills 90210 (BH 90210, if you will) iconically shows her portrayal of Valeria Malone’s lavished soap opera-esque lifestyle– perfect for those ready to be kept on their toes.

Beverly Hills 90210 is infamous for its drama rich story line, following a group of young adults through and post high school graduation, into their young adult lives. The show begins as a family moves to Beverly Hills and follows two children’s lives into the drama that is held behind their new high schools front doors. Befriending begins between the new kids, Brenda and Brandon, and their classmates, which quickly melts into a drama of young adults with too much money on their hands. The writing and production of BH 90210 was impressively ran by the power duo, Berg and Harberts. BH 90210 being the duo’s first major production, clearly paved the way for the success of their future productions– including successful spin-offs from BH 90210 like Melrose Place and the 2008 revival, 90210. Gretchen Berg and Aaron Harberts production of Beverly Hills 90210 was only a stepping stone toward their success in today’s television production scene.

Saved By the Bell’s story line gives that same sense of teen drama, but in a more relatable and middle class-esque way. This show follows the lives of high school teens and guidance they receive from their principal. This sitcom touches real world subjects just like BH 90210. Rebooted from the Disney series, Good Morning, Miss Bliss, Saved By the Bell ran its course on the NBC network. Developed and produced by Peter Engel, this show delves into the issues that arise when young adults start reveling into their adult selves– trouble makers, nerds, jock, popular girls, and all alike.

BH 90210 is available to stream with a subscription on CBS’s All Access website, Hulu, Amazon Prime, iTunes, and Google Play as well.