The feud between the supposedly angst-filled disrespectful youth and selfish earth destroying old people is ever present in today’s world. Where we are in the age of social media fuels the war between baby boomers and millennials that much more, with access to post about it ANYWHERE users want—regardless of whether their opinion was asked for or not. To set things straight, a “Baby Boomer” is classified as an individual born between the years 1946-1964 and a “Millennial” is someone born between the years 1981-1996. The differences between these two generations may be overwhelmingly obvious to some, but some are often left confused in this crazed war between two generations, so let’s break it down.

To millennials, baby boomers’ social media use is almost laughable. Over sharing, over posting, posting weird irrelevant things, is often how millennial view baby boomers on the internet. However, baby boomers can say just the same thing about millennials. Since there is obviously an age gap between the top generations, this results in different interests. While the majority of 25 year olds’ Instagram posts are of their Saturday brunch or their #OutfitOfTheDay, baby boomers who’d rather post about their families’ accomplishments or meeting with old friends, will find the other generations posts uninteresting. This doesn’t have to add fuel to the fire but it often does, due to the millennials use of memes. Clarification—a meme is a humorous photo, image, or video, that goes viral on the internet. Here are a few prime examples of the Baby Boomers vs. Millennials memes: 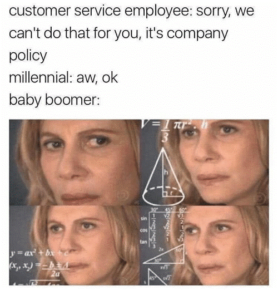 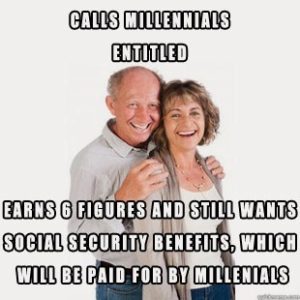 More often than not, memes that go viral are millennial biased, since many baby boomers are generally not even familiar with the use of memes, let alone have the knowledge to use them.

Apparently there is not enough turmoil in the world already, so society has made an executive decisions to criticize the food habits between baby boomers and millennials. Many people would never even think about the differences in diet between these generations, but realizing these differences also gives insight on more differences between the two. Millennials dine out almost twice as much as baby boomers. They rely more heavily on “convenient” food rather than making a pot roast like many of their parents made for them growing up. Mobile ordering is a huge part of this convenient food culture. Major chains like Dunkin Donuts, Starbucks, Panera Bread, Taco Bell, and many more restaurants and coffee shops have cultivated apps allowing customers to order their food on their smartphone before they even get in their car to go pick it up, making it even that much more convenient. Social media also creates trends in the food world and since the majority of social media users are millennials, these food trends trend amongst said generation. One major and stereotypical food habit of millennials is the overuse of avocado, even more, avocado toast. This food is “trendy”, appearing in thousands of millennial’s brunch posts. 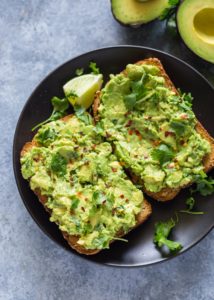 In fact, there’s a meme about it: 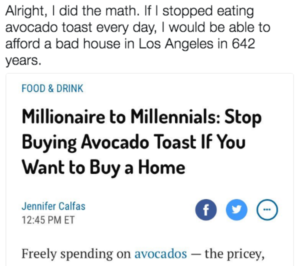 Baby Boomers vs. Millennials: The Workplace

As of 2018, millennials make up 35% of the workplace and baby boomers 25%– though by the year 2025, millennials will make up 75% of the labor force. This being said, baby boomers are coworkers with millennials and vice versa. The generation gap between baby boomers and millennials is most clearly shown while observing the workplace. Millennials hold a different set of skills than boomers do. The differences in the skills acquired by both generations, are actually rather complementary to each other, and bring diversity to the workplace. Due to the era in which boomers grew up (i.e. raised by parents who went through great depression, financial hardships, etc…), they often cling to their job and are rule followers in fear of losing that job and not getting an opportunity for another. Millennials on the other hand, grew up in a time of diverse opportunities, making them more susceptible to creativity and taking chances, as they know failure is just another learning opportunity. The tech skills most millennials have also benefit working with their boomer coworkers who may or may not have the same level of tech skills.

Whether you’re a boomer, a millennial, or anything in between, keep in mind that placing blame on who “destroyed the economy” or “ruined the American image” will do nothing but halt progress on fixing these issues.

One Reply to “Baby Boomers vs. Millennials”